Fun, Energetic, and Changing Lives – The #DriveForResponsibility Drives On!

The Every Kid Learns Foundation and the Responsibility Foundation have teamed up with basketball all-stars “Pee Wee” Harrison, a former member of Meadowlark Lemon’s Harlem All-Stars, and “Hollywood” Brown, a former Harlem Globetrotter. Together they are trekking (touring) across the country to meet with governor’s, principals, teachers, students, celebrities, VIPs, and to promote our mission. By conducting fun and engaging assemblies for school children, they are changing lives. Their message? Responsibility.

Students have the opportunity to participant in the nation’s largest student mock election! This will be the 4th time the “Every Kid Votes!” mock election has brought together students from all over the U.S. to vote for who they think should be president. This year over 10,000,000 (ten million) kids are projected to cast their ballot on November 1st!

What better way to teach the children of today how to run the country of tomorrow than by helping them to learn to vote, serve their community and accomplish a national goal together. The story of Responsibility continues to unfold, and our children will write their epic chapter this year. They will tell the story of how they participated in government by the people and helped to build an international icon that inspires Responsibility for generations to come.

Students who raise $10 or more will have their name permanently recorded at the Statue of Responsibility. For every $25 a student raises, their name will be entered into a drawing to win one of the many $5,000 Responsibility Scholarships. 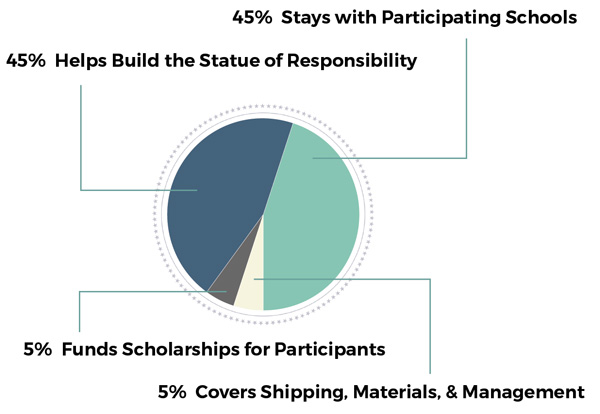 Want to experience what life is like on the Drive? Here’s a daily entry for Day 16 Sept 8, 2016, as written by Derrin Hill, CEO.

“Today kicked off early with Pee Wee, Hollywood, Jason, and David doing a state capital presentation in Denver. They were warmly welcomed and even had an entire school class doing a tour and became a part of the presentation.

Next up Marc and I joined them at the Place Bridge Academy for a school assembly with 1000 students.

The energy in this assembly was pumping! Peewee and Hollywood were amazing. They got everyone super excited about responsibility, participating in the ten lessons, the mock election, and the fundraiser. This assembly had media representation from four major TV news stations. We also had the education policy advisor from the office of the governor. They interviewed Pee Wee, Hollywood, several kids, and me.

Immediately following this event, the Drive made their way to Laramie Wyoming to meet with the president of the Wyoming State Senate, the Chief of Staff from the governor’s office, the former Chief of Staff from the previous governor’s office, and the Head Coach of University of Wyoming basketball team. They hosted us in one of the media rooms and invited a writer from the city newspaper and one from the University paper to be present.

This was a great meeting where several of the people in the audience shared their stories of responsibility. When we presented the gift of the collector’s edition set to the state officials, the President of the State Senate commented on how important the project is, how excited he is for the vote, and how he is thrilled that it’s not just a vote. To quote him he said, “I remember participating in mock elections as a kid. I thought that was cool. But having the mock election combined with the vision you have for the Statue of Responsibility is exactly what our country needs.”

He didn’t just share nice words; he also committed that he would work with the Chief of Staff for the governor’s office and the legislature to pass an appropriation for the fundraiser from the state to match whatever funds are raised by the students of Wyoming.

He also gave us a video segment encouraging other state legislators, Governors, and public officials to support the vote and the fundraiser.

We also spent time with the Chief of Staff for the governor working on how we can cooperate on messaging to share with the state superintendent and all the other superintendents in the state.

Another great day. More progress. Getting closer and closer to achieving our goals!

It can be hard for those who are not involved in the day-to-day activities of the Drive for Responsibility to recognize the impact this is having or the incredible amount of work that goes into it. I hope this little window into one day will share the excitement in progress being made.

Thank you to everyone who’s help making this a success. Especially to the four rockstars PeeWee, Hollywood, David, and Jason who are out on the road thrilling crowds of students, building momentum support from leaders, and doing the long hard work taking care of the many details (changing tires, hauling materials, and equipment in an out of state capitals in schools, getting thousands of copies, logistics, endless hours of driving, etc.) from well before sun up until well after sundown each day.

In one of the schools visited there was a little girl participating in the assembly. Not long after the assembly started the teacher took her out because she was very vocal and disruptive. As the teacher took her out of the gymnasium and started down the hall, Pee Wee rushed out of the door to catch up to them. This wonderful young lady was delighted that Pee Wee came to pay attention to her.

As soon as Pee Wee started spending time with her and helped her balance the spinning ball on her finger, the angry outbursts turned into laughter and a giant smile. He went on to walk her back to her classroom where the teacher was taking her. Hollywood kept the other 600 students enthralled with the assembly. This act of responsibility, this act of kindness completely made her day and touched the hearts of her teacher, principal, and everyone else who saw it.

This is another great example of the power of recognizing a need and taking the responsibility to fill the need. Thank you for that great example Pee Wee!”

Where will we be next? Be sure to check out our schedule on DriveForResponsibility.org. We may be coming to your neighborhood!

Check out this video showing what life is like on the Drive. https://www.facebook.com/driveforresponsibility/videos/316081855437945/