The Utah PTA held their annual leadership convention at Utah Valley Convention Center Wednesday, Thursday, May 11 & 12, 2016. The convention was well attended. It highlighted the efforts/initiatives of the UT PTA. Among the events were keynote speakers, workshops, and sponsor booths. In association with Studies Weekly (https://www.studiesweekly.com/) an Orem, UT based education curriculum company, the Responsibility Foundation was able to introduce the Every Kid Votes campaign http://everykidvotes.org/ with the accompanying nation wide Vote-A-Thon fundraiser. This is a special event for kids to learn more about and get involved in the selection process of a U.S. President. In addition, the children will have the opportunity to help raise funds for an international monument, the Statue of Responsibility (https://en.wikipedia.org/wiki/Statue_of_Responsibility). Marc Liebman, Senior Vice President for Programs and Services for Responsibility Foundation, and a previous superintendent for several school districts in Northern California, introduced the two programs to all attendees. It was well received.

The convention was also a historical gathering. Gov. Gary Herbert signed a bill that would increase trust land funds by approximately 50 percent with the support of The PTA and School and Institutional Trust Lands (SITLA) representatives. This will potentially add tens of millions of dollars per year to Utah’s education system. Gov. Herbert said the bill, which must be approved by voters in November, will help Utah’s quest to provide a first-rate education for our children that is second to none by bringing more stability to the distribution of trust land funds.

Sponsored by Sen. Ann Millner and Rep. Mel Brown, Senate Bill 109 would amend the Utah Constitution to make the distribution of trust land funds to Utah schools less subject to economic fluctuations and better able to keep pace with growth and inflation. The amendment would also give educators and parents greater certainty in the budgeting process and help them apply the funds where they are needed most.

The Responsibility Foundation looks forward to a successful school year, mock election, and fundraiser with the UT PTA in 2016-17. 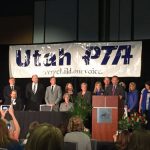 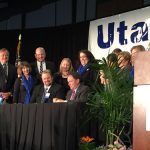 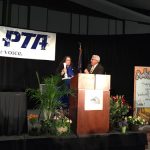